Entrepreneur of the Year Awards Winners

Entrepreneur of the Year Awards Winners

Martial Thevenot, Entrepreneur of the Year 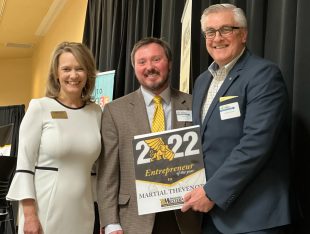 The Entrepreneur of the Year Award honors an entrepreneur who has been in business for more than five years for their professional achievements and civic contributions to their local community.

With his family, Martial Thevenot leads a group of socially conscious businesses known as Team Perka. Born in Canada, Thevenot earned a bachelor’s degree in psychology from Brock University in Ontario and a degree in common law from the University of Ottawa. A father of three and grandfather of three (with a fourth on the way), he is past president of the South Side St. Joseph Rotary Club and current president of the Performing Arts Association Board. Thevenot is a past board member of the St. Joseph Chamber of Commerce and Albrecht-Kemper Museum of Art.

The Emerging Entrepreneur Award honors an entrepreneur who has been in business for five years or less for their professional achievements and civic contributions to their local community. 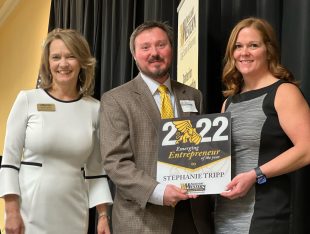 Stephanie Tripp was raised in Maysville, Missouri. She received a bachelor’s degree in elementary education from Missouri Western in 2012 and a master’s in educational administration from UMKC in 2015. She returned to Missouri Western to obtain a degree in business management, and in 2016 became a franchisee of Auntie Anne’s in St. Joseph through the Craig School of Business Applied Entrepreneurship Program. She now owns four franchise businesses in St. Joseph, Branson, Missouri, and Kansas City, Kansas, and will add two more locations next year inside the new terminal of the Kansas City International Airport. She and her husband Nick have two children.

lives of excellence through applied learning. Missouri Western is located in St. Joseph, Mo., and is committed to the educational, economic, cultural and social development of the region it serves. Visit missouriwestern.edu.